What Have I Done?

Now each morning when I awake, I pray and then ask myself, “What have I done?”

I am involved with the BlueSky/Greenfield wind turbine project in N.E. Fond du Lac County. I am also a successful farmer who cherishes his land. My father taught me how to farm, to be a steward of my fields, and by doing so, produce far better crop production. As I view this year’s crops, my eyes feast on a most bountiful supply of corn and soybeans. And then my eyes focus again on the trenches and road scars leading to the turbine foundations. What have I done?

In 2003, the wind energy company made their first contacts with us. A $2,000 “incentive” started the process of winning us over, a few of us at a time. The city salesmen would throw out their nets, like fishermen trawling for fish. Their incentive “gift” first lured some of us in. Then the salesmen would leave and let us talk with other farmers. When the corporate salesmen returned, there would be more of us ready to sign up; farmers had heard about the money to be made. Perhaps because we were successful farmers, we were the leaders and their best salesmen.

Sometime in 2004 or 2005, we signed $4,000 turbine contracts allowing them to “lease” our land for their needs. Our leases favored the company, but what did we know back then? Nobody knew what we were doing. Nobody realized all the changes that would occur, over which we would have no control.

How often my friends and I have made that statement: What have I done?!

I watched stakes being driven in the fields and men using GPS monitors to place markers here and there. When the cats and graders started tearing 22-foot-wide roads into my fields, the physical changes started to impact not only me and my family, but, unfortunately, also my dear friends and neighbors. Later, a 4-foot-deep by 2-foot-wide trench was started diagonally across my field. A field already divided by their road was now being divided again by the cables running to a substation. It was now making one large field into 4 smaller irregularly shaped plots. Other turbine hosts also complained about their fields being subdivided or multiple cable trenches requiring more of their land. Roads were cut in using anywhere from 1,000 feet to over half a mile of land to connect the locations. We soon realized that the company places roads and trenches where they will benefit the company most, not the landowner. One neighbor’s access road is right next to some of his outbuildings. Another’s is right next to his fence line.

At a wind company dinner presented for the farmers hosting the turbines, we were repeatedly told – nicely and indirectly – to stay away from the company work sites once they start. I watched as my friends faces showed the same concern I had, but none of us spoke out. Months later, when I approached a crew putting in lines where they promised me they definitely would not go, a representative told me I could not be there. He insisted that I leave. The line went in. The company had the right. I had signed the lease.

Grumbling started almost immediately after we agreed to 2% yearly increases on our 30-year lease contracts. Some felt we should have held out for 10%. What farmer would lock in the price of corn over the next 5 years, yet alone lock one in at 2% yearly for 30 years? Then rumors emerged that other farmers had received higher yearly rates, so now contracts varied. The fast-talking city sales folk had successfully delivered their plan. Without regard for our land, we were allowing them to come in and spoil it. All of the rocks we labored so hard to pick in our youth were replaced in a few hours by miles of roads packed hard with 10 inches of large breaker rock. Costly tiling that we installed to improve drainage had now been cut into pieces by company trenching machines.

Each night, a security team rides down our roads checking the foundation sites. They are checking for vandals and thieves. Once, when I had ventured with guests to show them foundation work, security stopped us and asked me, standing on my own property, what I was doing there. What have I done?

Now, at social functions, we can clearly see the huge division this has created among community members. Suddenly, there are strong-sided discussions and heated words between friends and, yes, between relatives about wind turbines. Perhaps this is a greater consequence than the harm caused to my land – life is short, and friendships are precious.

I tried, as did some of the other farmers, to get out of our contracts, but we had signed a binding contract. If you are considering placing wind turbines on your property, I strongly recommend that you please reconsider. Study the issues. Think of all the harm to your land, and, in the future, to your children’s land, versus the benefits from allowing companies to lease your land for turbines.

WHAT HAVE I DONE?

PLEASE DO NOT DO WHAT I HAVE DONE! 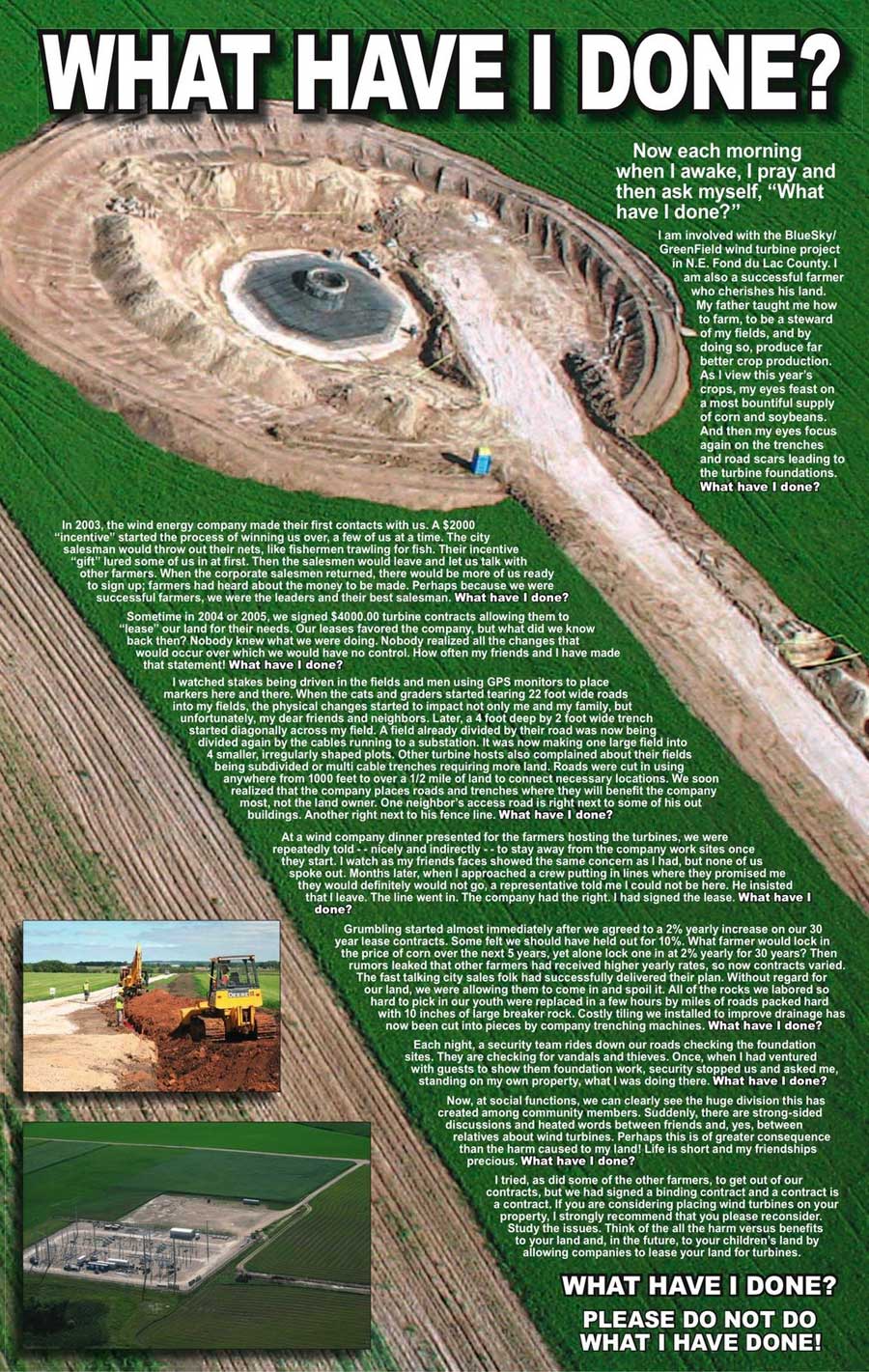 Advertisement in the Chilton, Wisc., Times-Journal, October 25, 2007. It was written by Don Bangert on behalf of the farmer, whose contract with the wind company – following the norm – prevents him from speaking openly about any problems. Bangert told National Wind Watch that other farmers have the same feelings expressed here, and if they were allowed to speak there would be no difficulty in passing serious setback and noise restrictions. Which is why the wind companies’ contracts prevent such speech. Contact Don Bangert to obtain the latest print-quality version of this ad for reproduction.