Selected opinion pieces from residents in the project area. Some were published in multiple news outlets and are only currently available as links from the Orleans Hub.

Orleans Hub March 14, 2020
Cuomo’s Plan to Fast Track Siting Takes Away Local Control
John Riggi, Councilman, Town of Yates
Governor Cuomo proposed the most significant and dangerous overhaul of renewable energy project permitting/siting since the enactment of Public Service Law Article 10. It was later passed as part of the state budget as is now known as Article 94C.

Lockport Union-Sun and Journal March 12, 2020
State and Local Officials Prepare for Change in Siting Law
Benjamin Joe
State and local area officials argue for inclusion in the process of siting industrial energy in the area.

Orleans Hub March 9, 2020
Minority of Rural Residents Forced to Bear Impact of State’s Extreme Energy Goals
James Hoffman, Somerset Resident
Industrial Wind and Solar Installations will not supply the cheap abundant, reliable energy our modern society needs to function. Industrial Wind and Solar are space-hungry, require huge subsidies, are expensive, are environmentally damaging and threaten the health and well-being of those who are forced to live among them. Our energy policies need serious redirection.

Buffalo News March 2, 2020
Cuomo’s Power Grab on Energy Steamrolls Local Communities
Kate Kremer, SOS Vice President and Resident of Yates
Changes from Article 10 to Article 23 leave fewer options for rural communities to have a say in industrial developments. “Governor Cuomo and the urban environmentalists egging him on appear to believe upstate is vacant land, peopled by selfish unintelligent residents. This was their approach to siting landfills in the 1980s and it’s what they are planning with industrial wind and solar projects now. They don’t care that rural towns and villages do not want massive industrial projects blighting their communities. The state plans to crush all opposition. That is the purpose of the governor’s recent amendments to the state budget. Big project developers and “do anything” green ideologists were not getting the results they wanted so the governor is throwing out the state siting law (PSL Article 10) and creating one that meets the demands of developers, including cutting town boards and rural citizens out of the process.” (Buffalo News articles are available by subscription only or by signing up for an account)

Orleans Hub February 27, 2020
Yates, Somerset officials oppose new Cuomo push for reviewing renewable energy projects
Jim Simon,Yates Town Supervisor and Jeff Dewart, Somerset Town Supervisor
The Town of Somerset (Niagara County) and the Town of Yates (Orleans County) are adamantly opposed to Governor Cuomo’s attempt – under the guise of a last-minute amendment to the state budget process referred to as Article 23 – to accelerate renewable energy development at the expense of our towns, our citizens and our environment.

Lockport Union-Sun and Journal Op Ed February 26, 2020
Our View: Home Rule Must Prevail in Utility Sitings
Members of the Niagara County Legislature agreed last week to set a public hearing on a proposed law that would prevent companies looking to invest in renewable energy projects from obtaining local tax breaks before moving forward; and to form a committee to monitor the state’s approval process for such projects, which involves the potential for a state siting board to overturn local zoning laws that restrict or bar the projects.

Orleans Hub January 20, 2020
Yates Town Councilman Urges Apex to Formally End Turbine Project
John Riggi, Councilman, Town of Yates
Our towns were, are and will continue to remain fully and fervently opposed to Apex’s imposition on our communities. Clearly, given the strength of local laws and our “no Payment in Lieu of Taxes” (PILOT) resolution, the company is hoping that the State will allow waiving of local laws and regulations, as well as local constituent protections. Due to our successful opposition, Apex informed their leaseholders in early 2019 that an Article 10 application would not be filed in 2019. Apex, six years is enough. Time for you to pull the plug on Lighthouse Wind.

Buffalo News December 28, 2019
Rural Residents Need to be Heard in Green Energy Debate
Pamela Atwater, President, Save Ontario Shores
What kind of renewable energy solutions will New York State invest in? Big wind and solar corporations would like us to believe the answer lies primarily with their sprawling renewable projects in upstate New York. Rural opposition speaks of the heavy burden these projects place on small towns and the environment. Upstate New York electricity is already 90% zero-emissions, including hydroelectric and nuclear sources.

Lockport Union Sun and Journal October 1, 2019
Wind is a Bad Buy for the Energy Hungry
Steve Royce, Appleton
Demand for electricity during the summer months can be as much as twice the demand during the spring and fall. So, how did New York state’s wind turbines do during the past summer? There were 94 days during the summer season. On 41 of those days, the 1,987 MW of installed wind capacity generated a daily average of less than 200 MW. There were only 17 days during which the average daily output exceeded 500 MW, or 25 percent of installed capacity, and only three days that output exceeded 40 percent of installed capacity.

Lockport Union Sun & Journal July 31, 2019
Somerset deserves support of downstate environmentalists
Jim Shultz, Founder and executive director of the Democracy Center and Lockport resident
What environmental groups could do is this. They could make it their mission to assure that communities like Somerset don’t end up losers in the transition to clean energy, but instead serious winners. And this does not mean fake solutions like converting a rural community into a massive wind farm for downstate, surrounded by rotor towers taller than the Washington Monument. It means real help. They have a company ready to convert the coal plant into a high-tech data processing center. To make that happen, Somerset and its neighbors say they need support from the state.

Lockport Union Sun & Journal July 5, 2019
Protection of Open Spaces is an Environmental Necessity
Jim Hoffman, Town of Somerset
Those who reside in the rural and semi-rural parts of New York state do not want to see the industrialization of our countryside and the associated physical and environmental damage that will occur if industrial wind turbines are permitted. Local laws, comprehensive plans and policies in place should govern, and they should not be usurped by the state.

Buffalo News: Another Voice June 30, 2019
Conflicts Entangle the State Energy Authority
Jim Simon, Supervisor, Town of Yates
The Yates Town Supervisor questions the relationship between the Article 10 Siting Board and its members actively promoting a wind turbine project that has not yet been approved.

Lockport Union Sun and Journal May 21 2019
New York owes its ‘Coal’ Communities
Daniel Engert, Supervisor, Town of Somerset
With the ban of coal-fired generation in New York state, the coal plants owner (Beowulf Energy) has proposed to re-purpose these sites as data centers powered by renewable energy. Unlike the overwhelmingly opposed Lighthouse Wind proposal by Apex Clean Energy, this is precisely the type of development that Somerset envisioned in our comprehensive plan and zoning. However, they need assistance from the state to bring the project together.

Lockport Union Sun and Journal April 29, 2019
Apex, say goodbye to ‘Lighthouse Wind’
John Riggi, Yates town council member
Apex Clean Energy needs to own up to the fact that they chose a poor project site. They now need to take the bitter pill and tell the public what they’ve told their leaseholders in private: The Lighthouse Wind Project will not move forward.

Lockport Union Sun and Journal February 28, 2019
Similarities of Galloo Island, Lighthouse Wind are Striking
Kate Kremer, Yates
What does the withdrawal of the Apex’s Galloo Island industrial wind project have to say about their project proposed in Somerset and Yates? Both are proposed along the shores of Lake Ontario in a migratory bird and raptor flyway.

Buffalo News: Another Voice February 21, 2019
Wind Factories Threaten Our Health and Well-being
Mary Kay Barton, Wyoming County
The ongoing push by Gov. Andrew M. Cuomo and his pals in the wind industry to cover rural New York State with industrial wind factories is a needless attack on our natural environment, and the health, safety and welfare of citizens and targeted communities.

Buffalo News February 5, 2019
Sierra Club has Strayed
Bob LaPorte
Maybe the Sierra Club’s new slogan should be: “It became necessary to annihilate western New York’s avian population in order to save them.”

Lockport Sun Union Journal: Opinion February 2, 2019
Apex, the Emperor Unclothed
Christine Bronson
It defies common sense. There is no study that can convince me that any normal human being would actually gravitate to a community where homes are dwarfed by giant 591-foot industrial wind turbines.

Buffalo News: Another Voice January 17, 2019
Sierra Club Disputed on Wind Power
Sherri Lange, CEO, North American Platform Against Wind Power
The U.S. does not garner 30 percent of its power from industrial wind. The real number is around 4 percent.

Orleans Hub January 5, 2019
Comments on DPS site continue to show opposition to Lighthouse Wind
Steve Royce, Appleton
Since the inception of tracking the public comments, 339 comments, or 21 percent are in favor of the project, 1,260 comments, 79 percent, are opposed.

Orleans Hub December 6, 2018
Apex needs oversight for proposed turbines in sensitive area near Lake Ontario
Kate Kremer, Yates
On October 26, administrative law judges for the Department of Public Service (DPS) ruled that Apex should not have withheld information about an eagle’s nest in the Galloo project area. Administrative Law Judge Michael Caruso stated that this withholding of relevant information “raises serious questions about the applicant’s character and fitness.”

Orleans Hub November 29, 2018
Sierra Club should push for hydro power, not industrial wind turbines
James C. Hoffman, Somerset
The Niagara hydroelectric power plant is under-utilized. An examination of the record reveals this. With a source of clean renewable power at our door step, why is Lighthouse Wind and other industrial wind turbine projects even being considered?
It seems as though the Sierra Club with its historically deep involvement in environmental issues would be aware of this underutilization of a clean renewable power source and promote its full use. Sadly, the Sierra Club has aligned with Big Wind and Big Government, a convenient alignment that will assure them of financial and political support in the future.

Orleans Hub September 27, 2018
Apex Event for Lighthouse Wind Will be More of a Lecture than a Forum
John B. Riggi, Councilman, Town of Yates

Orleans Hub August 15, 2018
Apex Continues to Speak in Generalities and Platitudes About Proposed Project in Yates and SomersetJohn B. Riggi, Councilman, Town of Yates

Orleans Hub April 21, 2018
Yates Resident Should be Outraged at Apex, Not Town Board for Legal Costs
James Bansbach, Yates 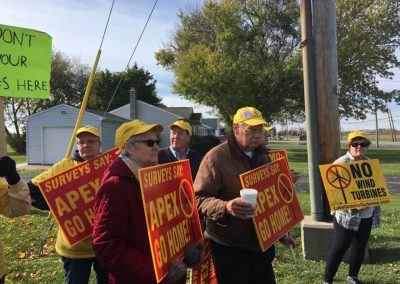 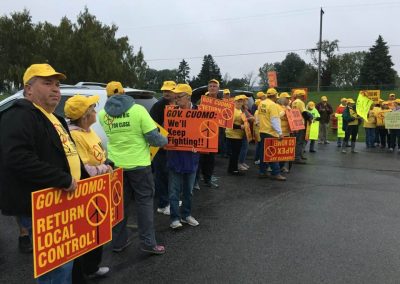 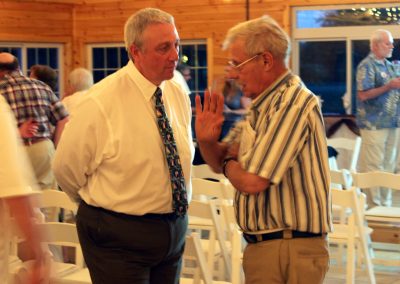 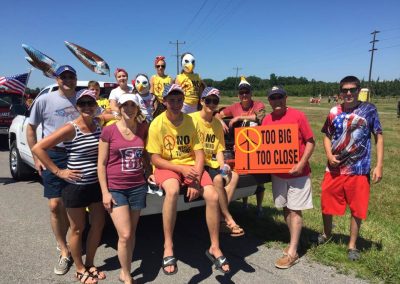 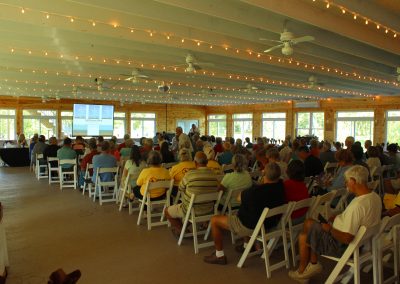 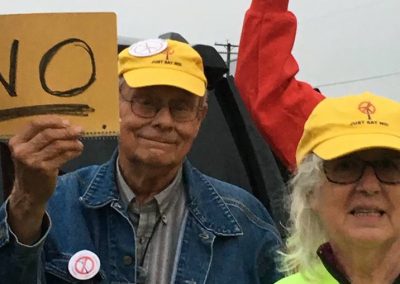